WILL THE STRAUS/HUNTER GAG RULE PREVAIL?

The Texas House will convene today at 9:00 am, an hour earlier than normal.  The House set up the rules by which it will be governed during the session at the very beginning of the session.  These rules can do everything from allowing reps to smoke in their offices to laying out how many hours a bill must be posted before it can come to the floor.

The rule change being presented is being called the “Straus/Hunter Gag Rule”.  If adopted, this rule will not allow any amendments to be offered for SB1, the Senate’s version of the Property Tax Reform Bill. The rule change is as follows:

Pursuant to Rule 3, Section 4(2) and Rule 6, Section 16(f) of the House Rules, the House Committee on Calendars proposes the following rule governing floor consideration of SB 1:

Section 1. No amendments will be offered on second reading and third reading consideration of SB 1.

If adopted, this rule change will set a precedence that could be used to stop amendments to other bills in the future.

Please contact your state representative this morning and let them know what you think about this rule change.  Their contact information can be found here.

If House leadership polled members last night, depending on the results, the rule will either come to the floor or it won’t.

Please let your voice be heard on this and please let others know about what is happening today on the Texas House floor.

To Kill a King: the Unmaking of Speaker Straus 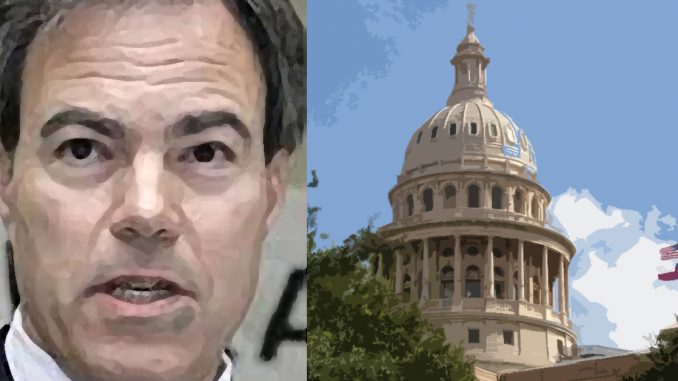 Regular readers of Texian Partisan will recall last week when we reported that Governor Abbott had cut Texas Speaker of the House Joe Straus out of the planning for the special legislative session. Additionally, we theorized that this may have started in motion events that could lead to Straus’s ouster from leadership. Well, that process may actually be underway.

Reported on Tuesday (07/11/17) in the Statesman, in a 36-28 vote, the Bexar County Republican Party’s executive committee passed a resolution of no confidence in Straus, calling for his departure. This vote was opposed by the GOP County Chairman (and Straus ally) Robert Stovall, who “attempted to rule it out of order.” However, he lacked the support to do so.

As a leader, Straus’s unpopularity has steadily been growing for being seen as (at best) a weak advocate for many conservative causes, but also his petty vindictiveness towards house members who don’t toe the line well enough. Until recently, no GOP legislator had seriously opposed him, and he was even reinstated as Speaker, unanimously. The reason for this is simple. As Ralph Waldo Emerson observed, “When you strike at a king you must kill him,” and Straus was too strong to risk direct opposition that would likely fail, leaving the opposition to suffer his wrath. But like an aging alpha-lion, Straus is now showing signs of weakening, and those in the pride who have long chafed under his leadership are circling for an attack.

The resolution is the latest in a series of challenges for the beleaguered Speaker. In addition to the governor pushing him out of the special session, presumably for killing much of Abbott’s agenda through administrative channels, the Speaker also recently endured an uprising of conservatives. In an event dubbed the Mother’s Day Massacre, the House Freedom Causus slaughtered the remainder of Straus’ approved agenda in retaliation for his quiet garroting of the caucus’ program. Additionally, the election of James Dickey as the new Texas GOP chairman, who was considered the non-establishment candidate, could also be seen as a rebuke of Straus and his ilk. With recent events in Bexar county, Straus’ home turf, it’s starting to look as if Republicans from top to bottom are holding Straus culpable and an affirmative obstacle to achieving the kind of reform desired by Texas Republicans, ensconced in their party platform.

It is yet uncertain whether more counties will jump on the dump Straus bandwagon, but currently it is difficult to foresee ends where Straus comes out on top without humbling himself, confessing mea maxima culpa, and reversing much of his past conduct and positions. Unlikely. When and if Straus is replaced, hopefully it won’t be with a member that he’s personally groomed, but rather an outsider that will shake things up and deliver on change long-promised.

The Texian Partisan has recently learned that a similar vote of no-confidence has been issued by the GOP leadership in DeWitt County, Texas. Spurred on by the Bexar county resolution, Tuesday night, DeWitt GOP had their County Executive Meeting where they unanimously declared (with only 3 out of 10 members absent): “We the DeWitt County Republican Party, resolve that there should be a change in the Texas House speakership due to non-support of the RPT platform by the current incumbent.” Commenting on the vote, DeWitt County GOP Chairman Regina Cowan said, “We may be a small county here in DeWitt, but we have no right to bellyache about Straus or our Representatives that vote for him if we aren’t willing to back [our beliefs] up. This just lets them know we have their backs and it’s time to do the jobs we elected them to do.”

Late Thursday afternoon, the Republican-controlled Texas House of Representatives took the first step toward capitulation on the Obamacare Medicaid expansion. A few hours later, the amendment directing the Texas state healthcare bureaucracy to start preparing for the expansion was reconsidered and rescinded after a handful of conservatives scrambled to rescue the situation — but the fact that it passed at all is a wake-up call. END_OF_DOCUMENT_TOKEN_TO_BE_REPLACED

A month after confessing his desire for the Legislature to have a conservation about Medicaid expansion, Speaker Straus now says it’s time to “get our heads out of the sand” in order to find a “Texas solution.” The problem? His idea of a solution is really nothing more than a sugarcoated version of what the Obama Administration is already offering. END_OF_DOCUMENT_TOKEN_TO_BE_REPLACED