Tune in at 12:00pm CT Feb 20, 2014 about Islamist presence in Texas with David Heckert and Heidi Thiess on RagingElephantsRadio.com 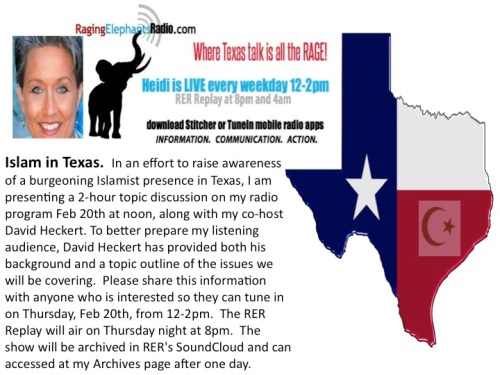 The MOA compound in Texas, described by the FBI as an “enclave” and “communal living site,” is in Brazoria county along County Road 3 near Sweeny. It was discovered by the FBI due to a tip from an informant in New York.

The MOA referred to its Texas commune as “Mahmoudberg” in online instructions for a parade in New York in 2010. A posting on an Islamic message board in 2005 advertised a speaking engagement in Houston by someone from Mahmoudberg.

According to the reports, the commune is seven to 10 acres large, is in an “extremely wooded area” and two or three trailer homes moved there in December 2001. However, ACT members visited the area as part of Clarion’s investigation and interviewed one nearby local who confidently said it is closer to 25 acres in size and spoke of a presence dating back to the late 1980s.

“The area is so rural it is quite common for residents to shoot firearms for target practice or hunting on private property without interference from law enforcement,” one FBI report states.

Locals told the ACT members that they have

Shells found in the area of MOA’s ‘Mahmoudberg’ enclave in Texas heard gunfire coming from the commune. Pictures of shells from the area are posted to the right:

The FBI reported in 2007 that one commune resident used to be a leader at the MOA commune in Badger, California. The site was called “Baladullah.” In March 2001, one of the Baladullah members was arrested for transporting guns between New York and South Carolina. Another was charged with murdering a police deputy that caught him breaking and entering a home.

Interviewed residents all agreed that the MOA members are private, yet when the ACT members were spotted in the area, they were immediately and repeatedly approached. At one point, a commune resident gave them a final warning to leave, despite the fact that they were not trespassing or harassing MOA members.

“It was definitely very threatening and menacing,” an ACT member told me.

Multiple sources confirmed that one resident of the commune is a police officer. According to a nearby neighbor, one of the MOA members used to drive trucks for the U.S. Army in Kuwait.

The commune is also linked to a non-profit called the Muslim Model Community of Texas. Members travel to Houston to worship at the MOA Dawah Center that is linked to another organization called First Muslims of Texas.”