The Attorney General Eric Holder is launching a legal assault on the state of Texas. In lieu of the recent Supreme Court ruling that struck down Section 5 of the 1965 Voting Rights Act, which took much of the South out from under the control of the Justice Dept. over voting procedure changes, Holder ‘is asking a federal court in San Antonio to require the state of Texas to obtain approval in advance before putting future voting changes in place. 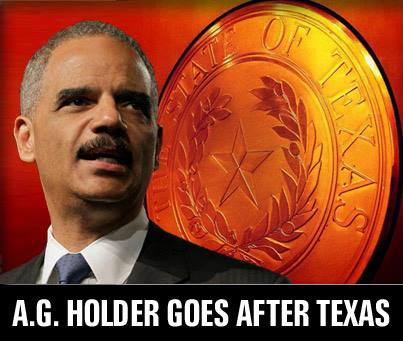 Holder said that based on evidence of intentional racial discrimination presented last year in the redistricting case in Texas, “We believe that the state of Texas should be required to go through a preclearance process whenever it changes its voting laws and practices.”‘

Texas, consider the gauntlet now thrown. Justice Dept. action against the Texas voter ID law is expected next, along with a string of actions against other states that have enacted such laws.

“In the coming weeks, Attorney General Eric H. Holder Jr. is expected to announce that the Justice Department is using other sections of the Voting Rights Act to bring lawsuits or take other legal action to prevent states from implementing certain laws, including requirements to present certain kinds of identification in order to vote. The department is also expected to try to force certain states to get approval, or “pre-clearance,” before they can change their election laws.”

In so many words… Holder’s Justice Department is going to do everything in its power to negate the Supreme Court’s ruling.

This entry was posted in Federal Overreach, Voter ID. Bookmark the permalink.